Fluorescence Lifetime Imaging (FLIM) is used as a relatively new method for imaging fluorescence. It makes use of fast detectors (photomultipliers, PMTs) which can temporally resolve the detection of photons and thus the lifetime of the excited stage of a molecule (fluorophore) population. A short laser pulse excites fluorophores, and the detector(s) measure the decay curve of the fluorescence signal - each photon is detected as a time resolved signal.

What makes it so special? It is independent from the intensity of a signal - fluorescence is not only measured as the amount of photons, but by recording the lifetimes of the excited stage.

This has enormous advantages, e.g. in FRET (Foerster ['Fluorescence'] Resonance Energy Transfer) studies, because it is much less artifact prone then intensity based FRET measurements. Using FLIM, quantitative data for FRET are relatively easily obtained. With that, you can calculate FRET efficiencies - and thus the distance of your donor and acceptor molecules. You can display the data, also as images, indirectly representing a spatial resolution of 2-10 nm, e.g. in protein-protein interaction studies!

FLIM itself is also used for physiological studies, as many indicators (for pH, Ca2+, etc.) react to the external milieu - this is also the principle when they are used for fluorescence intensity based analyses. However, recorded intensity depends on thickness of sample, concentration of the fluorophore, bleaching, and so on. Most of that can be overcome by FLIM, just by measuring the lifetime changes in reaction to the external milieu. 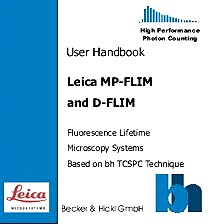 Our FLIM setup is a Leica implemented high-end Becker and Hickel system. 2 FLIM detectors are built in the spectral scanhead of the SP5 CLSM. A pulsed (80 MHz) and tunable (710-990 nm) Ti:Sapphire laser (Mai Tai) is attached for multi photon (MP) excitation (can also be used for standard MP-CLSM). See technical data of the SP5 CLSM.

Please refer to the short FLIM instruction to get an overview. An even shorter version (containing only the information relevant for our MP-FLIM system) of that FLIM handbook can be downloaded from the Genetics intranet (external users should contact us). The full handbook is available on request.

The Becker & Hickl FLIM photo counting software (TCSPC 2.80, for our FLIM setup) can be downloaded in the Genetics intranet, External users, please contact us so we can send it to you.